In December 2016, in most of China’s large cities, a thick smog forced thousands of people to temporarily move to rural areas where the air is cleaner.

Analysing this phenomenon in an article called “Lessons From the ‘Airpocalypse,’” renowned Slovenian philosopher Slavoj Zizek, tells us how Chinese authorities attempted to “normalize” the extraordinary pollution:

“Perhaps the most surprising thing about this ‘airpocalypse’ is its quick normalization: After the authorities could no longer deny the problem, they established procedures that would somehow enable people to continue their daily life by way of following new routines, as if the catastrophic smog were just a new fact of life.”

Has the same not happened in Kosovo as well? When the data of all indicators of air pollution — provided by the Peer Education Network (PEN), the Science for Change Movement and the U.S. Embassy, to Kosovo’s Environmental Protection Agency — has showed scandalous levels of air pollution within the country. From our measurements we found that pollution in Prishtina city center was worse than in the Arberia neighborhood, where the U.S. Embassy had conducted its measurements.

This proves that one of the arguments made by the Ministry of Environment and Spatial Planning about Arberia being more polluted than the city center is wrong; they attempted to invalidate the U.S. Embassy’s data.

Attempts by the responsible authorities to ‘normalize’ an abnormal situation of air pollution went so far that the Minister of Environment and Spatial Planning, Ferat Shala, made a scandalous statement during an interview in the TV talk show “Me Erëzen,” which was broadcasted at the beginning of December 2016. “The situation is not as bad as it was in the years before,” said Shala as he began his elaboration. He went on to say that “we have a situation that we have followed for years and it continues to have somewhat the same parameters.” By not denying the level of pollution, moreover the minister said that current pollution levels “we could say, have lower parameters than in the preceding years.”

“The yearly average for exceeding the daily air pollution threshold was 75 days last year, whereas this [2016] year we’ve only exceeded it on 35 days, and not a lot of days are left until the end of the year. So in general, according to statistical data, we are better off than the year before by about 50 percent. This is a tangible, measurable, scientific and judicial fact, and for this I take full responsibility.”

Second, Minister Shala says “taking into account all the relevant and reliable statistical data of our institutions…,” attempting to suggest that only the data of the Ministry of Environment is “reliable,” and that all other data is unreliable (remember that air pollution data for Prishtina has been published by PEN, the Science for Change Movement and the U.S. Embassy in Prishtina). We must remind Minister Shala that the European Commission Progress Reports, for three years running (in 2014, 2015 and 2016), have given the same damning critique about the work of the institutions, saying “the lack of maintenance of measurement tools and their incorrect calibration, continue to be big issues, because they directly threaten the credibility of data.”

Thirdly, Minister Shala at the end of his statement says that the fact that the situation in 2016 was 50 percent better off than it was the previous year is a “tangible, measurable, scientific and judicial fact, and for this I take full responsibility.” This shows that the minister’s logic of governance is as follows: ‘The problem is inherited and as such we are not responsible, but we are working in the right direction.’

Seeing that the previous year the situation was 50 percent worse, then who should be held responsible for that? Allowing children and other citizens to be exposed to such horrible pollution and not informing them in a correct and timely manner about the risks related to pollution can easily be interpreted as a criminal act, and for this, the former minister and the current minister must be held accountable. Or maybe the minister cannot “calculate it scientifically and judicially.”

Alternative measurements by PEN and the Science for Change Movement

While those who are responsible keep quiet, we go out in the field to explore the truth. While those that are responsible attempt to normalize the situation, we present alternatives that show how extraordinary the situation is. So by focusing our work on research and local monitoring of air pollution, from January 2017, activists from PEN and the Science for Change Movement have been conducting systematic measurements (twice a day: before and after noon) inside and outside Faik Konica primary school in Prishtina, thanks to fantastic cooperation with the school staff.

Why did we focus on this school? For three main reasons: The first is that the area in which the school is situated is one of the most polluted areas because of high traffic congestion; the second is because children are one of the groups that is most vulnerable to pollution and most affected by it, and they are not informed by the responsible institutions; thirdly, because local air pollution research is not conducted by any other institution or authority.

By utilizing digital equipment such as the Airbeam, Dylos DC 1700 and diffusive tubes, which are calibrated beforehand with equipment provided by the U.S. Embassy in Prishtina, activists have researched and monitored air pollution, or more specifically, fine PM2.5 particles (microparticles with a diameter of less than 2.5 micrometers that increase predisposition to cardiopulmonary and respiratory diseases such as chronic bronchitis or even lung cancer). 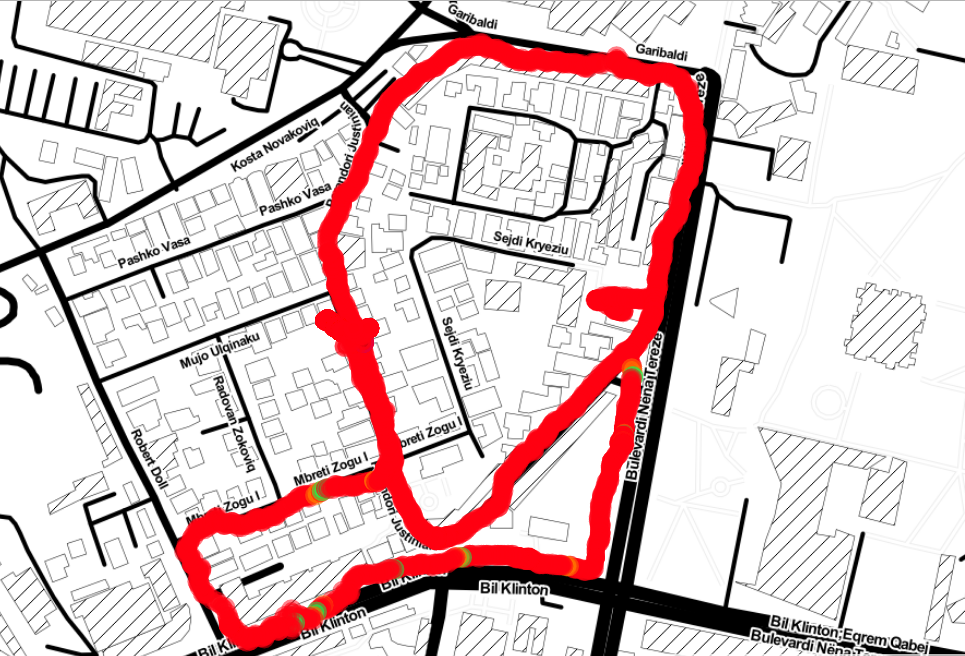 The red line represents the areas in which the measurements were conducted where values exceeded acceptable limits according to the Air Quality Index that is used by the U.S. Environmental Protection Agency. The measurements that are seen here were conducted on January 25, 2017, and the maximum level of PM2.5 pollution reached 160.44 micrograms per cubic meter. Whereas the values that are considered to be allowable are 0-25 micrograms per cubic meter. Image courtesy of PEN and the Science for Change Movement.

From the measurements that were conducted in and around Faik Konica primary school, from January 25th up until February 6th, 2017, air pollution with dangerous micro-particles was prevalent just about every day (from between 151 and 200 micrograms per cubic meter), and according to the Index of Air Quality that is used by the U.S. Environment Protection Agency, this kind of pollution is categorised as “unhealthy.” The only periods that are excluded are the afternoon on February 3, 2017, and all of February 6, 2017, when air pollution with PM2.5 micro-particles fell to an average level. 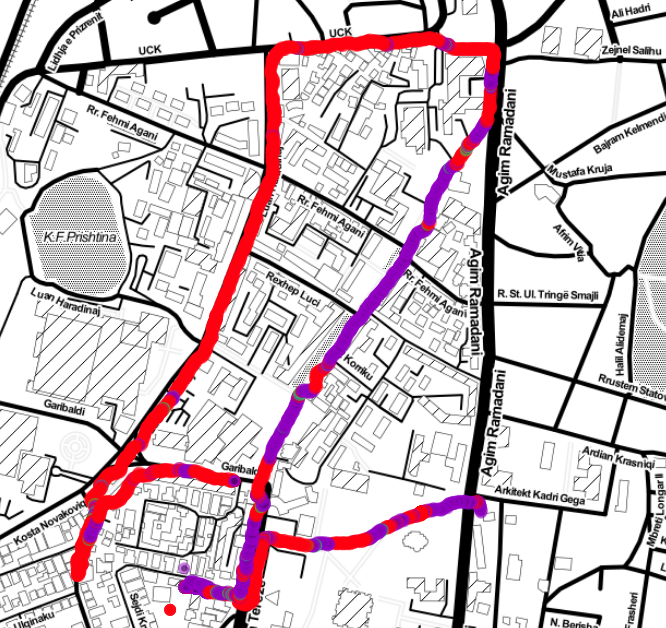 The red and purple lines represent the areas in which the measurements were conducted where values exceeded acceptable limits according to the Air Quality Index that is used by the U.S. Environmental Protection Agency. These measurements were conducted on January 30, 2017, during the morning, when children go to school. The red line shows pollution that is categorized as ‘unhealthy,’ whereas the purple line shows pollution that is classified as ‘very unhealthy.’ The maximum PM2.5 pollution level reached 179.20 micrograms per cubic meter. Image courtesy of PEN and the Science for Change Movement.

According to the data mentioned above, there is clear evidence that shows that pupils at Prishtina’s Faik primary school are at a constant risk of being poisoned, especially in days in which smog is prevalent, as a result of high levels of air pollution. Different reports and studies from renowned institutions, universities and centers have shown that exposing children to such high levels of air pollution causes detrimental effects to their health.

Here is a list of consequences that pupils at Faik Konica school are at risk of suffering from as a result of their exposure to air pollution: 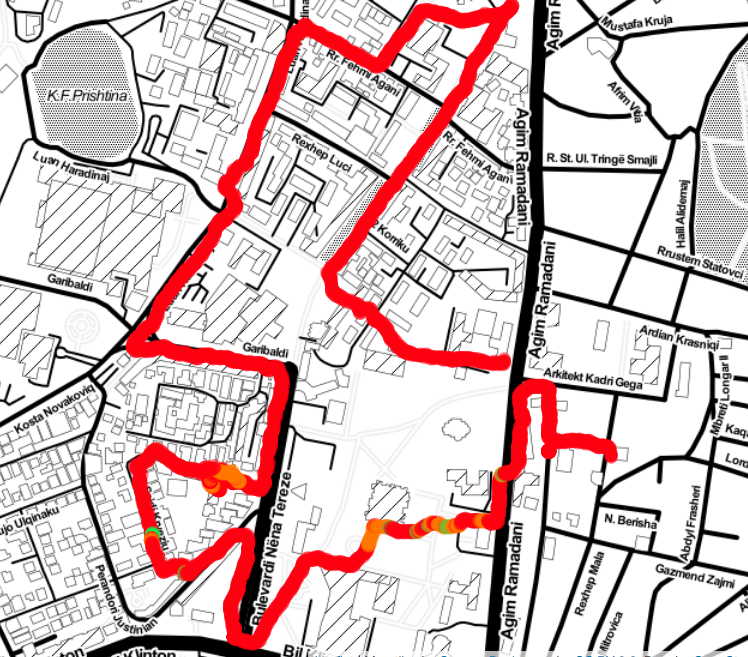 These measurements were conducted on February 3, 2017, during the morning, when children go to school. The red line shows pollution that is classified as ‘unhealthy.’ Here the maximum level of pollution with PM2.5  reached 115.47 micrograms per cubic meter. 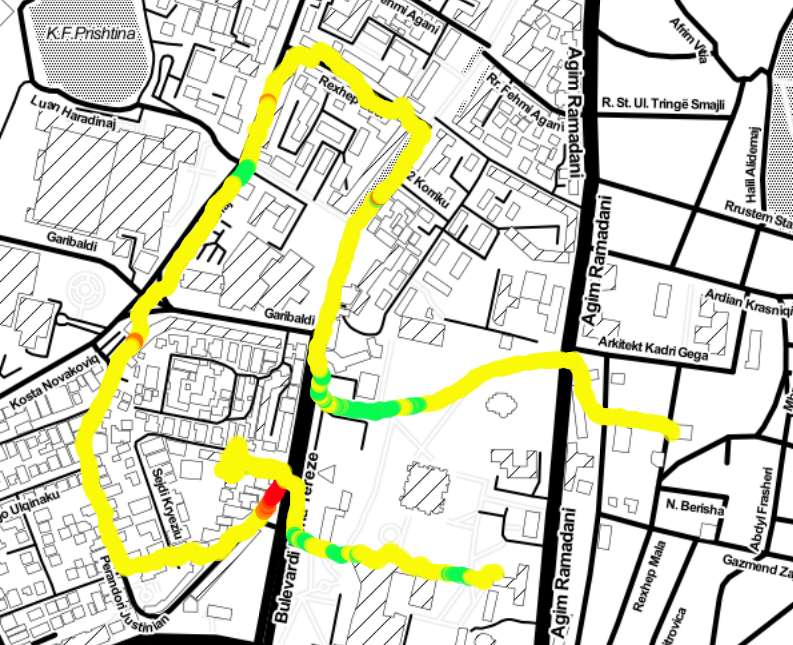 On that same day, during the afternoon of February 3, 2017, the level of PM2.5 air pollution was reduced. Here you can see a yellow line which shows that air pollution fell to a ‘moderate’ level, but not a ‘good’ level. In some areas it continues to be very high (see red and orange dots).

Seeing that Minister Shala likes scientific and judicial calculations, we invite him to take full responsibility and to immediately take measures against air pollution, especially to inform and to protect children. We also invite other schools to take measurements for their pupils.

In fact, in the coming months we will expand our cooperation with other schools because we believe that the “democratization of air” comes only with comprehensive, genuine engagement between social groups at a local level, and the equal involvement of citizens, representatives of institutions, independent experts and activists.